UKLASH + UKBROW SET Skip to content
Cart
HEY! WE USE COOKIES TO GIVE YOU THE BEST EXPERIENCE POSSIBLE ACCEPT & CLOSE

100% RESULTS GUARANTEED OR YOUR MONEY BACK The perfect beauty kit for anyone looking to enhance their natural lashes and brows with UkLash Growth Eyelash Serum and Ukbrow Eyebrow Growth Serum.

Proven formula infused with scientifically ingredients to target and strengthen the lash and brow hair follicles, so they appear longer, thicker and fuller.

We offer a risk-free Money-Back Guarantee if you have not achieved any improvement after 12 weeks of use.

Simply apply UkLash & UkBrow once a day for 8-12 weeks for full and best results.

SMOOTHLY RECEIVE YOUR UKLASH/UKBROW FROM EVERY 2 TO 6 MONTHS.

CHANGE FREQUENCY OF YOUR SUBSCRIPTION ANYTIME

does it really work?

Yes it does! However you must be patient and consistent. The time before you see results can vary as it depends on what growth cycle stage your lashes are at when you starting to use the product. It normally takes between 8-12 weeks to see full results. If you don't achieve any results after consistent use of 12 weeks you have right to claim for money-back guarantee. It is very important that you use the product correctly as instructed.

STEP 1 Remove your makeup with an oil-free makeup remover or cleanser.

STEP 2 Apply only one stroke of UKLASH at the root of your upper lashes once a day.

STEP 3 Wait until the serum has fully dried if applying additional beauty products.

With subscription you never need to be worried that you’ll run out of UKLASH and you pay 12% less! You just need to choose when and how often you would want us to deliver UKLASH to your doorstep. Your order and payment will be automatically processed.

• You can select the quantity in cart

• You’re all set! We will deliver your UKLASH for the subscription you’ve selected.

You can cancel anytime, no strings attached and no card details saved!

Please read more here on how subscriptions work and how to cancel.

Our hard working team aim to ship out your order within 24 hours (Mon-Fri, excl. holidays).

*Delivery times shall be considered as indicative timeframe as they might be subject to delays with the delivery company, especially during holiday seasons.

Returns: 14 days of receipt. We care about everyone’s hygiene, product needs to be returned unused in sealed packaging. I usually wear eyelash extensions which I was having done every 4 - 5 weeks (my bank balance wasn’t a fan) so when lockdown was put in place, I panicked and had a look for a serum. I eventually settled on uklash after a bit of googling. I wasn’t overly sure about the whole lash serum thing but thought I’d give it a bash, nothing ventured and all that, plus I’m too cack-handed to stick false ones on, couldn’t be doing with it, so this was worth the try. At first, it was hard to tell if there was any difference as I still had a good few extensions hanging in there... once the extensions thinned out I could see some growth. After about 6 weeks (all extensions gone at this point) I could see a significant difference, it’s really helped rebuild my lashes after years of extensions, they’re def thicker and longer. I just pinch them in a curler each morning and done! I can’t get over how long they look. I don’t bother with mascara during the day as I don’t need it (plus the furtherest I venture atm is Tesco once a week), though I did try them with mascara (for when we’re allowed out again) and it almost looked like I was wearing extensions but more natural. I’m right impressed! I’ve been using it 8 weeks now and I’m so pleased with my very own lashes. Although it hasn’t yet ran out, I’ve ordered more to be safe! 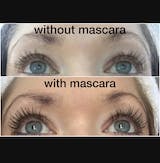 I am very pleased with the UKLASH product as it has caused my eyelashes to regrow, lengthen and thicken. Initially I was very pleased with the UKBROW although the regrowth was much slower than my lashes. Unfortunately after a few weeks I had to throw the brow product away as it had developed the most awful smell, so I have continued to use the lash product on my eyebrows with some benefit.
I will definitely buy the lash product again.

Have been using both the eyelash and eyebrow serum, having had eyelash extensions my lashes were pretty weak - but after 2 months of using it they have fully grown back with thicker and more hairs. I have very sparse eyebrows and the brow serum has slightly worked - however I didn’t have a lot to begin with in the first place. Happy and will be reordering.

I’m now on my fourth tube of the ukbrow and uklash. Try to use the ukbrow twice a day I noticed even better results that way, although obviously you will use it up faster. My brows were destroyed after years of plucking and after pregnancy my lashes fell out in clumps. These products have restored my lashes and helped my brows recover. It also makes lashes and brows darker which helps with their appearance. It takes 6-8 weeks minimum to see stronger longer lashes and brows.